Several accounts on Facebook shared an image of members of the opposition Indian National Congress party sitting in front of a banner saying: “Chor [thief] group reunion. ”However, the image has been edited – the original photo is from 2019 and the banner does not have those words printed on it.

The caption of the message reads: “Finally, the family accepts who they are!”

Screenshot of a misleading message taken on August 31, 2021

Although many people seem to have shared the post as satire, the original poster repeatedly insisted in the post’s comments that the image had not been edited.

Some people seem to have been misled by the message – for example, one user wrote: “Please look carefully at the poster, the word space is the same, the word core group appears to have been misspelled. Poster does not. appear to be edited. “ 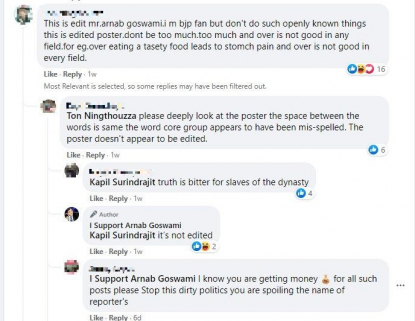 Screenshot of the comments below the original post, taken on August 31, 2021

However, the image has been changed – the second line of text on the banner has been added.

A reverse image search on TinEye shows that the original photo was taken in 2019 during a congressional working committee meeting.

It was shared in this report by Indian media Zee News. In the original photo, the banner only reads “Indian National Congress” in English and Hindi. There are no words “Chor group meeting” printed on it.

A similar photo of the same event was used in this report by the Mathrubhumi news site. The caption of the photo reads: “Congress President Rahul Gandhi with senior Congress leaders Sonia Gandhi, Manmohan Singh and others at the Congress Working Committee meeting in New Delhi. Photo: PTI . ”

The photo used in Mathrubhumi’s report is in the archives of the Press Trust of India (PTI).

Below is a comparison between the edited image shared on Facebook (L) and the original photo found on the Zee News website (R).

The judge, reading the verdict on Monday, said: “The court also finds that they were …